What a year this is turning out to be for me and for Christian. Those who follow my work and my social media platforms closely see that I have quite a lot of excitement going on. More about that at the end, because this post is not meant to be focused on me.

It’s about Chris and his massive success.

As you can see here, as part of finding his way in this world, Chris is focused on becoming a licensed driver. He has come a long way in the past five months from the first Sunday afternoon when we drove around the school parking lot together. I legitimately thought I was going to go through the windshield when he applied the brakes at his first stop sign.

Poor Snowflake (for those who don’t know, that is my Jeep daughter’s name. My Jeeps are girls. Don’t judge me).

Well, goodness knows during my first lessons, I was a hot mess express and nearly drove my boyfriend’s father’s big black Ford F150 (with an extended cab, mind you) into the telephone pole in front of my house.

Being the Google Map guru that he is, navigating his way is not an issue whatsoever. As I expected, he’s fabulous with shortcuts especially in unfamiliar territory. And I have to tell you, it’s AUsome (to my tribe, you see what I did there) to have another driver in the house. It gives me a much needed break – sometimes to catch up on texts and messages while he takes the wheel, and other times to close my eyes for ten seconds and breathe. Note, I only close my eyes for about ten seconds, because he *is* still learning and I need to be another set of eyes and ears as he grows more comfortable with being on the road and increases his techniques.

I was really worried after many failed attempts at the written test as to whether or not this dream of his would become a reality. I wondered if the failures were due to test anxiety, or the fact that deep down, maybe he wanted to drive, but he didn’t want to drive if you know what I mean. I was jumping and crying (tried to hold back the tears … NOPE, couldn’t) at the driver’s license center the morning he passed in November. After struggling just weeks before with a terrible end to a short lived job, I wanted this so damn badly for him. He once again defied the odds and overcame what had become a barrier to independence. Nevertheless … HE persisted (he earned the right to borrow this line in this particular case).

Speaking of the short lived gig as a chef, Chris and I met with his job coach and OVR counselor that same month at … ummmm, where else? Dunkin’! (Convenient, of course). We discussed the whole “where to go from here” concept and it became pretty heated. Chris actually got up from the table for several minutes and nearly had a meltdown.

Chris could have easily returned to Dollar General and yes, we did push that a bit because we didn’t want him, well, to be broke! We told him he could work and earn some money part time while pursuing his goals in food service. After some frustrating moments, he said to us, “I really like helping people. I don’t want to work in a store. Some days I hated it.” After another half hour of discussion, we honed in on the idea of volunteering at local nursing facilities where he could evaluate a variety of job possibilities that would help him to actualize goals.

He went home that morning and made a list of places he could call or apply while I rushed off to my little ATS home away from home (my mini apartment as I call it). He spent that day, and the next few weeks emailing, calling, and visiting multiple places with his job coach. He did keep other part time work under consideration, but ultimately decided “that isn’t what I want.”

After many visits and conversations with his job coach, Chris followed his heart, and applied to be a volunteer at Kane Regional Center in McKeesport. For those who know us better than others, you know that Kane is where our dear friend Frankie resides due to complications from a TBI stemming from a horrible accident that thankfully did not take his life. Kane is also where my dad passed away ten years ago after complicated illness. Kane, being a county managed Medicaid facility, has a reputation for perhaps not always being the most ideal placement. However, due to our own personal experiences, we know that there are so many good people who work there who truly care about the residents and treat them like family.

Chris, even at age 11, enjoyed caring for and entertaining Dad’s roommate and “neighbors” on 3B. He would assist with feeding, tidy up messy rooms, wheel people up and down the hallways, play board games and even belt out a tune now and then.

Chris’s spark to follow his gift (as Steve Harvey says, his GIFT, not his PASSION) has led him down a road that has landed him in a place of pure abundance.

Chris was clearly not only finding his place, but he found something even more powerful that I too needed to rediscover this past year. He found his faith in Him. A little over two months ago, he was invited by Pastor Dennis and Pastor Marie to give his testimony in front of a small and close-knit group. He disclosed and explained his diagnosis of autism, his struggles, and his triumphs. Together, everyone prayed for and with him as they knew he was applying for a part-time food service and hospitality position with decent starting pay and benefits.

Prayer works, y’all. My boy VOLUNTEERED. HIMSELF. INTO. A. JOB. He was offered a position in February, completed his onboarding and has been working – HAPPILY – for a few weeks now. 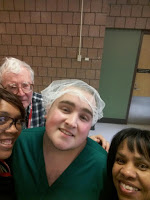 Chris did what he set out to do. He tried out different areas in a “helping place” and learned new skills while he was at it. He cultivated new interests while building a bit on his passion. He discovered the church. He found his own tribe – not a tribe that either his grandmother or his therapist or I encouraged. He learned that there is life after high school and you aren’t necessarily meant to be with those people all of your life. He found a way to provide food service while helping others all at the same time. And, he gets to see our buddy several days a week and make him smile (especially when he beats Chris at Chess or Connect Four on the iPad).

A few weeks ago, Pastor Dennis and Pastor Spike invited us to service at Calvary Baptist in West Mifflin. They said they would love to have Chris as a member and thought he’d be an asset to their Sunday School, would make contributions to their incredible congregation, and find more camaraderie. We attended Sunday service, and I was amazed at how welcoming and laid back everyone was. We felt so much love and we felt the Spirit the minute we walked in the door.

But nothing prepared me for what I would witness during sermon.

As Pastor Dennis preached, Chris would hear others saying “yes” or “amen” in agreement with testimony. But at one point, he was visibly moved, and he said aloud, for all to hear, “He died for my sins and saved me. I WILL praise him!”

No matter what or who you believe in, the POWER and FAITH in his declaration was evident. I was in tears then and I’m in tears now. Chris has found confidence, he has found purpose, and he is moving forward in his life amidst other struggles he faces on the daily.

He has followed his GIFT – giving to others – while still exercising his passion, which is food service. This is person-centered planning, people. If you don’t know the term, get thee to Google University.

Person-centered planning was the focus of my last C2P2 (Competence and Confidence: Partners in Policymaking) session with my fellow female warriors (yes, we all happen to be ladies in this group). Yes, we need to be voices for others in our world, including and especially our loved ones. We need to speak up when they cannot, until the day that they can and will use their own voice. Never, ever stop believing that they can. And, if they are unable, please put yourself in their shoes and think, “what might I want if this were me? What is most humane? What promotes self-sufficiency? What promotes inclusion in our world?”

I have a homework assignment due in a week, and I refuse to do it alone (well ok, I kind of refuse to do it in general if I’m transparent. I can only add comments, share my thoughts on his vision and encourage his plans). We were asked to create a life plan with goals for our children and share in group during class. Well, I clearly learned my lesson that Friday and Saturday, because I spoke up and said “sorry, I can’t and won’t do this alone. His life plan isn’t up to me at this point. This is for him to determine. He has a voice and uses it.”

I’ll leave the worksheet for him Monday morning and see what he comes up with that I can add to. However, I don’t think he needs much of my help, just some gentle nudging and reminders.

He has taken the wheel, he controls the gears, and he is the one accelerating forward. And it’s going to be … *aulright.

*For decades, many family stories have been shared about autism’s impact and influence on our world. You haven’t heard ours.

Our story is now not only being shared through blogs and social media, but with the entire WORLD.

You can read an excerpt of our journey – and of a dozen triumphant women – in “It’s Going to Be AUlright – Testimonies from Ausome Women Raising Ausome People.” The eBook is available NOW for Pre-Order on Amazon (print version in April 2019, date TBD) and became a best seller in less than 6 hours ranking in the top 10 in several categories and even #1 on multiple lists including Rachel Hollis and Michelle Obama! I am so proud to serve as a contributing author and lead editor in this project with an incredible tribe. Little did I know that this would be the FIRST international publication I would be a part of, and that Imprisoned No More (a longer and fuller account of our story) was meant to come later.

Please stay tuned to The Caffeinated Advocate and my social media platforms (my personal page on Facebook, my Facebook TCA page, LinkedIn, Instagram) for information about our Virtual eBook Release Party on World Autism Awareness Day, 4/2/19, book signings, an official launch party in Pittsburgh and more. You can also watch my Amazon Author Page.